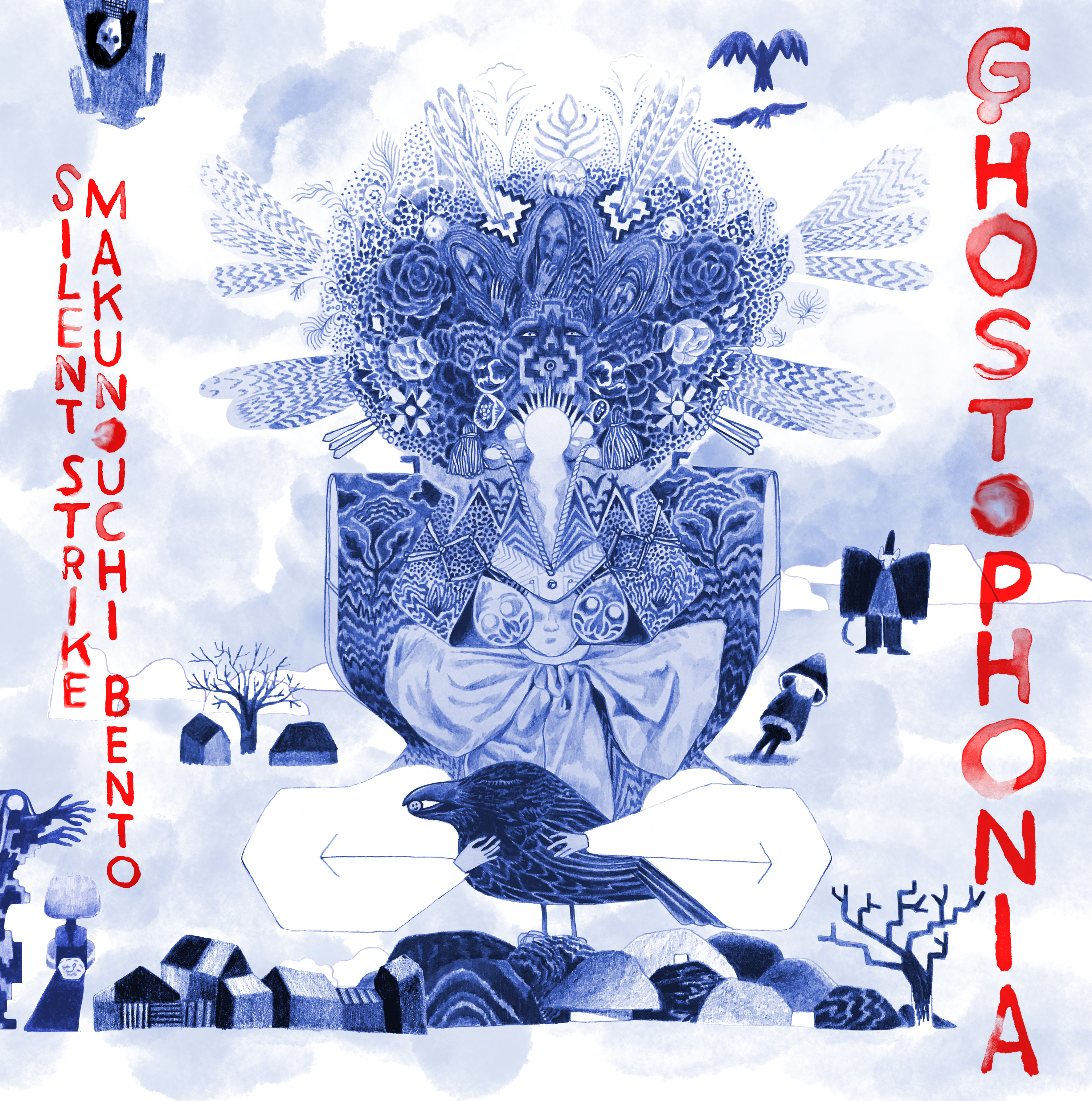 13 Silent Strike & Makunouchi Bento - Descending to the Center of Earth 05:22

When the Sun Falls Silent, the first pack of ghosts start painting the walls bright red. Their lips clatter repeatedly, summoning Winds Veiled in Darkness. Skeleton horses and old rusted carriages slowly carry their families to the Underwater Cemetery. Heavy chains Break from the Cellars, crawling on their bellies across the scorched grass. Merry Scythe-Wielding Crones collect mandrake by the new moon’s light. Boats made of pork ribs and lard Slop Wretched after completing their task. The bride’s uncle creaks his bones to the Rhythm of the Noose. Soldiers with golden buttons for eyes glean their Lost Youth from the TV. Any Hidden Beholder would transform into a hollow tree when spotted. Ghosts of the Fallen Hunters feed the ghosts of their prey with table scraps. If they can hear us now, it will be Our Turn to Hear Them. The violin player launches into a joyful song, his Fingers Gliding over the diners. All return to the deafening train Descending to the Center of Earth.

A concept album loosely based on the folklore music from the region of Banat, Romania, collected and recorded by Béla Bartók on phonograph cylinders, roughly a century ago.

All tracks written, produced, mixed and mastered by Ioan Titu aka Silent Strike [

Artwork by Sorina Vasilescu aka Vazelina [

As Le Mystère des Voix Bulgares did two decades ago, Ghostophonia offers a new generation a way to expand their sonic horizons. The difference between this release and Le Mystère is that Silent Strike and Makunouchi Bento are not aiming for the mainstream; their musical archaeology is centered on intrigue. Read more...

Richard Allen at A Closer Listen

For this material, they created an immersive and multilayered journey that blends old sounds with modern equipment and techniques, bringing forward a mind-bending approach to music which has been almost forgotten in the mists of time. From complex drones and otherworldly textures to deep static insertions, grainy vocal samples and abstract percussive elements, this LP has all it takes to become a classic release for the Romanian experimental music culture. Read more...

Once the first layer is deleted there is always deeper and more disturbing layers triggering further replays. Ghostophonia retrieves accidental analogue troubles and finally settles as an ubiquitous enlivened visitor ghost-guest house. Ghostophonia will be one of the albums of the year because it eschews high cultural fidelity and still stays true to its source material. Read more...

Getting inspiration from the invisible and mysterious they have managed to reassemble ghostly shades and hyper-realistic flickers with the assistance of more or less traditional sounds. [...] For the reviewer here it is the first notch from the new decade to be truly worthwhile. Read more...

The induced-state of the project is one of an imaginary soundtrack for a movie that will never be.. so you have to dream it yourself. Apart from the ghostly voices, you can hear lots of bass-heavy percussions, various bells, glitches, and ambient atmospheres. The sound surprises the listener by its diversity, everything changes not only from one song to another but also inside each track. Read more...

That’s where the real ghosts come in, as some of those voices are threaded throughout this album’s tracks in subtle ways that enhance the “goings on.” This is done skillfully without relying too heavily on the old recordings, so it doesn’t turn into a nostalgia trip. Read more...

Sun Falls Silent: Interesting mix of styles. Very attractive sounds. This is high on the creativity spectrum, although not an easy listen. I like the processed vocals. It's a little hard to review because it's so leftfield, what to judge it by? I like the denseness of it and the mix of found objects. There's sense in the chaos somehow. Nice work.

I've been enjoying listening to this while wanding around the sodden countryside.