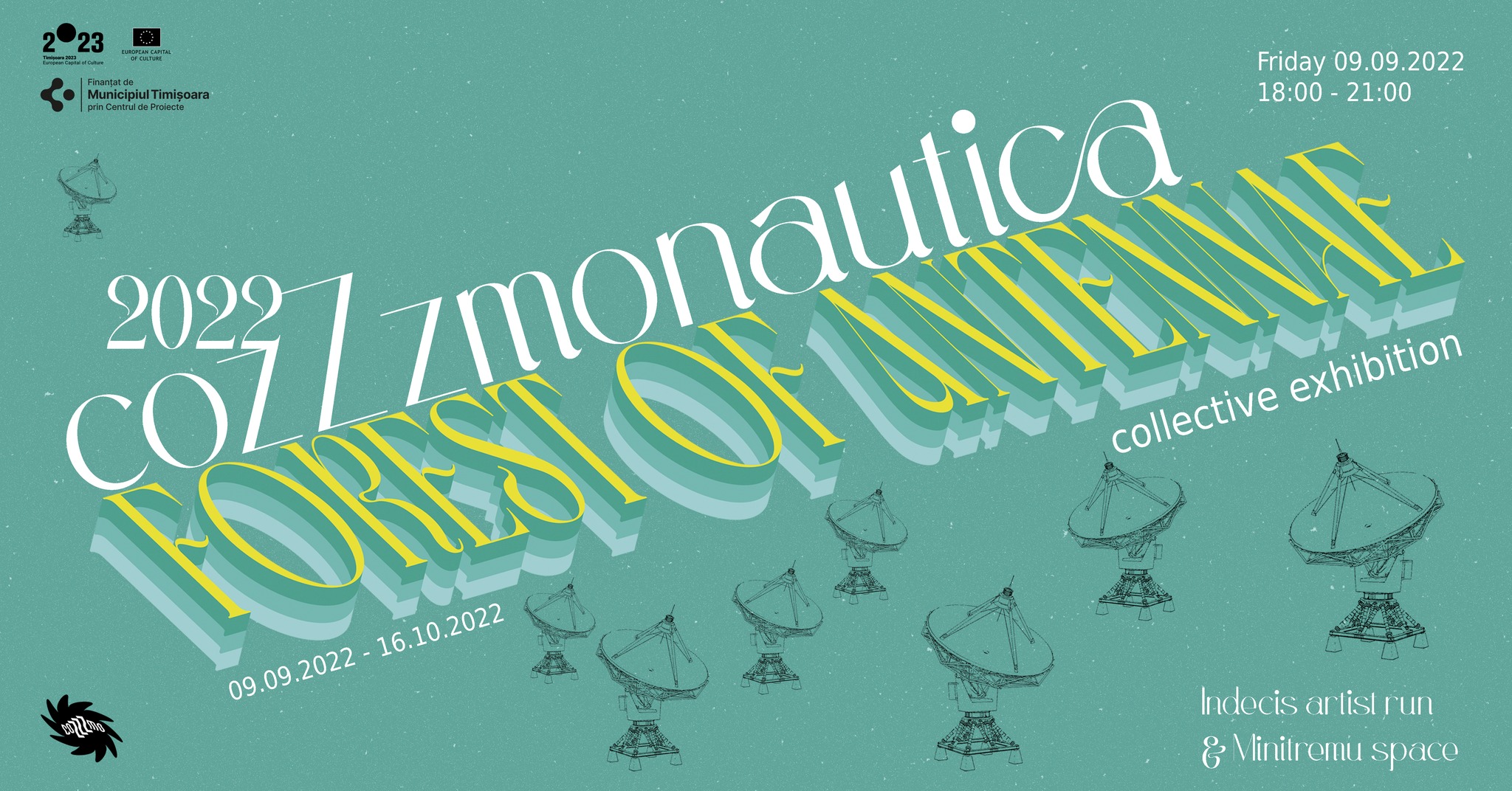 Cozzzmonautica 2022 - Forest of Antennae
Collective exhibition
09.09.2022 - 16.10.2022
Opening on Friday 09.09.2022
18h - 21h
*Waka X dj set
24 artists/artists/artistx/group of artists temporarily populate our space with their artifacts, turning it into a search and communication station with extraterrestrial intelligence. Whether they embrace speculative theories about implants that stimulate your artistic production, or address topics such as the impact of the Anthropocene, aware of the current moment of rupture with our planet, or describe mysterious phenomena - we discover omnipresent complexities and deep interconnections through their works.
artists:
Alexandra Mocan
Alma Gyovai
Ana Kun & Mihai Drăgan
Andrea Mikyska
Andrei Arion
Cenaclul Sefeu
Claudia Chiriță
Cristian Eduard Drăgan
Csilla Bartus
Daria Pugachova
Ecological Gyre Theory
Gavril Pop
Hanna Husberg and Agata Marzecova
Irina Adamatzky
Magdalena Skrolecka
Maria Martelli & Silvia Moldovan
Marina Oprea
Mălina Bratu & Gabriel Mager
Mihaela Vasiliu
Mihai Zgondoiu
Minitremu Art Camp#7
Nava C2
Nicponiej Galeria
Vilmos Koter
"They said changes will happen on their part
that the wealthy will share their wealth to all
That the laws of the universe will also be on earth
whoever does not respect them will be dust in the wind…
No one will be subjected to anyone
who overnight became immortal and strong
There will be light for all and good in all things!
Come children, grandparents, grandchildren, let's pray to the stars!"
- Mihai Constantinescu, The aliens are coming, the Samba-Samba album, 1995, Electrecord CAT
“How can we maintain common interests and preserve the planetary solidarity that is collapsing day by day around pacifist extraterrestrial concerns and perspectives at this critical moment of impending climate crisis and geopolitical entanglement?
"Forest of Antennas" on the one hand records an increased planetary and extraplanetary receptivity driven by ineluctable changes and alterations to which no one and nothing can remain indifferent and on the other hand it measures the "cosmic loneliness" and indifference of a universe that is not for us.
Popular culture anthropomorphized these 'green men' or possible galactic civilizations, but it also endowed them with antennae. This imaginary of SF origins tells us that someone there is transmitting, or at least feeling. We can say that this sentient, non-human, almost insectile characteristic - of the antennae - admits xeno-sensitivity, and here it is - a non-phenomenological subjectivity, to which us humans have access only with the help of sophisticated instrumentation capable of accessing time intervals beyond human attention. Even recording the distortion caused by the creepiest objects in the universe – black holes – required turning the planet into a huge antenna.
Cozzzmonautica focuses on the transformations around and follows in the footsteps of the friendship between the American astronomer Carl Sagan and the Soviet scientist Iosif Shklovski, a friendship based on the search for SETI and the possibility of an opening to outer space, in a world that is not only bipolar but multipolar and multi civilizational."
- Ștefan Tiron
This large-scale Cozmo Exhibition will be followed by a series of audio-planetary-galactic hypersleep sessions as well as a series of lectures by special guests: Anamaria Borlan (SF&F author, coordinator of the Antares SF Club in Brașov), Chen Stanley Chan Qiufan (陈楸帆 SF writer from China), Professor Andrew Adamatzky (Computer Scientist and Director of the Bristol Unconventional Computing Laboratory), Irina Adamatksy (Guest Artist and Photomicrographer, UK/RU) and Jörg Matthias Determann (Author of Islam, Sci-Fi and Extraterrestrial Life and Professor at VCUarts Qatar). More details will be announced soon.
Indecis is an independent space in Timișoara, Romania, a non-profit organization consisting of an artist and an engineer, looking to promote and create dynamic relationships between art and artists/artists/artistx by organizing exhibitions, stimulating artistic production, publications or other cultural and educational events . Indecis lives in symbiosis, sharing the same place with The Secret Garden Bookshop and the Minitremu Association.
Minitremu is located on the border between art and pedagogy, being a laboratory of aesthetic experiences and creative development, through which children and young people can make contact with artistic processes that generate dialogue and reflection, and help them develop their own vision of life. A pedagogy that continues the tradition of constructivist educators, where learning based on direct experience is the main objective, and art and critical thinking can best be learned by meeting contemporary artists.
Co-organizer: Ștefan Tiron and the Minitremu Association
The project is part of the Cultural Program "Timișoara 2023 - European Capital of Culture" and is financed by the Municipality of Timișoara through the Project Center.