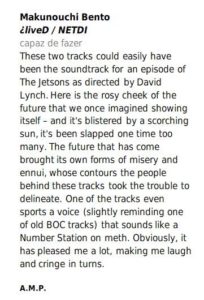 These two tracks could easily have been the soundtrack for an episode of The Jetsons as directed by David Lynch. Here is the rosy cheek of the future that we once imagined showing itself – and it’s blistered by a scorching sun, it’s been slapped one time too many. The future that has come brought its own forms of misery and ennui, whose contours the people behind these tracks took the trouble to delineate. One of the tracks even sports a voice (slightly reminding one of old BOC tracks) that sounds like a Number Station on meth. Obviously, it has pleased me a lot, making me laugh and cringe in turns.