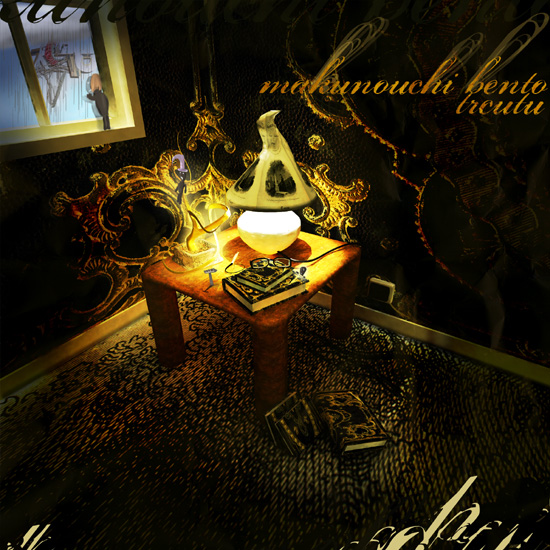 Bento’s new release is an excursion through classical compositions that manages to hold onto a genuine historical and aesthetic. Wether running them through the spontaneity and textural style of their own, or working from the influence and atmosphere felt by listening to them – they are unique interpretations.

This latest offering from Makunouchi Bento is a special one indeed – interpretation of and sound excursion into a few of their favorite classical compositions by such powerful and original composers as Erik Satie, Anton Arensky, Maurice Ravel, they hold nothing back while adapting them within the Mabento realm.

With its twists of melancholy, nostalgia, and even childlike amusement – Trcutu manages to hold onto a genuine historical and aesthetic interest found within some of the originals. At times picking up the melodies and running them through the spontaneity and textural styles of their own; while at others working not just from the originals but the influence and atmosphere felt by listening to them.

A special project made for the AVMotional 2 festival in Cluj-Napoca, Romania (28.05.2005) and released about a month later.

Artwork by Guillaume Richard aka Kaneel [

Makunouchi Bento's Trcutu may be unsettling at times, but after a few listens, the grandness of it sinks in and provides a great addition to their discography with this solid, diverse and well crafted release. Read more...

What you'll be able to enjoy is about how versatile can be this Romanian duo! From ambient to electronica and IDM, ending with a touch of videogamish sounding (aka chiptune), they are covering many of the genres they are known for doing with attitude, even adding a kind of oldschool spacey touch, so close to some of these retro futuristic movies. Read more...

Disregarding the technical proficiency of the pieces, one must be intrigued by their melancholy, harmony, emotiveness, nostalgia, composition and twisted sense of humor. Subjects (visual and aural) are treated in a unique way, preserving their organic authenticity, yet creating a totally new ambiance. Read more...

The sound is rich and ample, glitchy and at times surprising. Good suprises come when the reverence is not too overdone which gives some of the tracks a very original and appealing feel. Read more...

Makunouchi Bento at their best. Top-notch release touching on a variety of styles including downtempo, classical, IDM, dark ambient, and glitch. Read more...

Hey, I'm totally enjoying this! Smart, funny, infinitely melancholy. Very few of these projects manage to add something useful to the originals, but I'd say this is almost(!) up there with Biosphere's Debussy album (although less "destructive" maybe). Read more...

In the words of Monty Python... and now for something completely different... Trcutu by Makunouchi Bento is out there! Experimental ambient electronica sampling and evolving some familiar classical compositions... Read more...